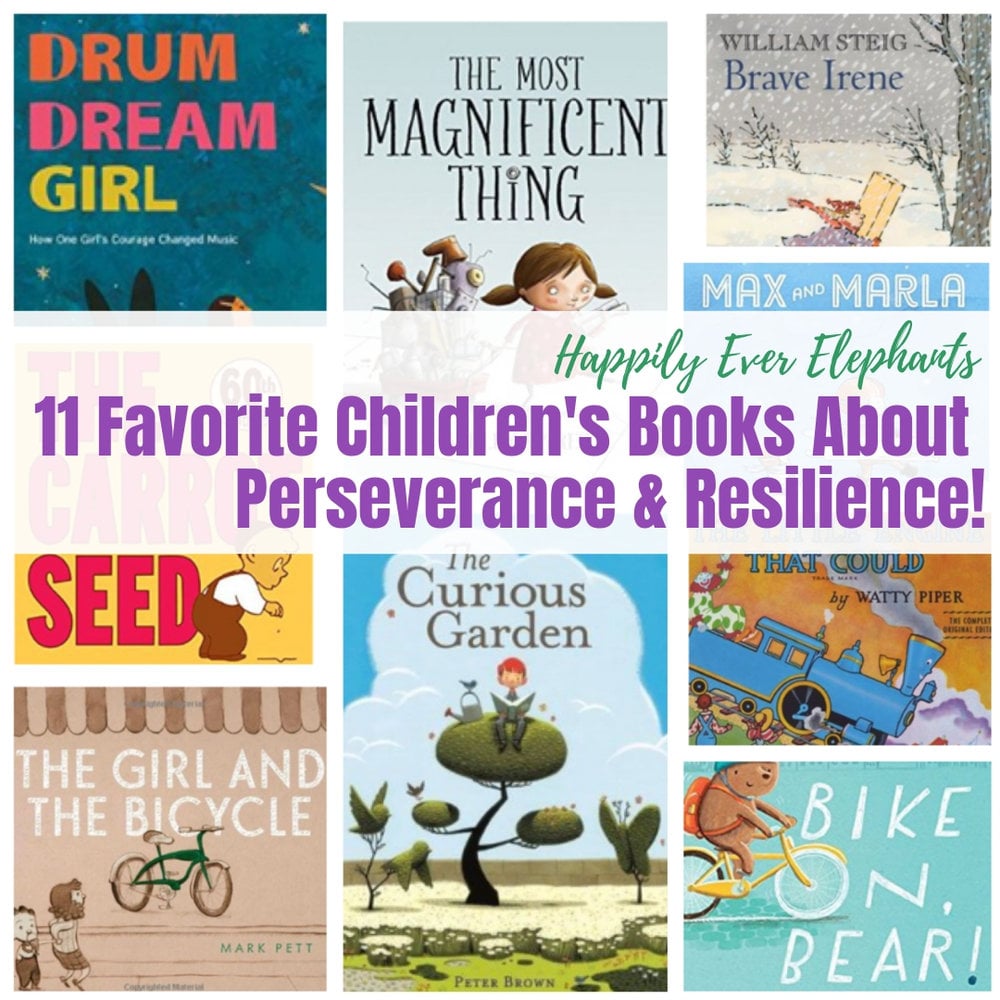 Inside: Children’s Books About Perseverance are so important when it comes to teaching kids about determination, growth mindset, and grit. Here are some of our favorite children’s books about resilience!

Why Read Children’s Books About Perseverance?

It’s amazing how much power those four little words hold, and how absolutely beautiful they sound coming out of the mouths of babes.

After my little one suffered from a stroke several days after his birth, I was determined to read him books about perseverance each and every day. I knew that a boat load of confidence and a hefty amount of grit would be vital to his rehabilitation, and I like to think that the books I read him since he was only ten days helped foster his current attitude that continuously keeps him rising to tackle each new challenge he faces.

Children’s books about perseverance are the BEST teaching tools.

Instilling confidence in a child is no easy feat, but through story, we can all help our little ones believe in themselves as they tackle new — and often daunting — tasks. Children’s books about perseverance provide engaging teaching opportunities while kids are snuggled against loved ones and relaxing in the safety of their own homes.

Giving children a story in which they can identify themselves and their own personal obstacles is priceless. And sharing books in which protagonists stop at nothing to achieve their goals may just turn your child’s “I can’t” into an “I can.” What more can you ask for?

Children’s books about perseverance are so important to have on your bookshelves.

The list that follows contains our favorite children’s books about perseverance, stories that showcase resilient kids who continue to work towards a goal despite setbacks and fear.

And here’s the thing.

Our kids need setbacks. They need to fail.

Failure is what helps them become tenacious children who will stop at nothing to conquer important goals. This will, in turn, help them become resilient adults.  And that, my friends, is a beautiful — and important — skill, one we should all hope to develop in our kids.

We hope you love these stories as much as we do. Happy reading!

Beloved children’s books about perseverance that get two trunks up from our team!

The Little Engine that Could, by Watty Piper: The famous phrase, “I think I can, I think I can,” originated from this brilliant book. What a perfect mantra to instill in every child — every person — no matter their age. This classic children’s story, first published in 1930, is timeless for a reason.

Sofia Valdez, Future Prez, by Andrea Beaty, illus. by David Roberts: Every morning, Sofia’s Abuelo walks with her to school until the fateful day he hurts his ankle at the local landfill. Sofia misses their walks terribly after his injury, and she wonders what can be done about the awful Mount Trashmore in their neighborhood. When she suddenly has an idea to turn the landfill into a park, Sofia sets out to achieve her goal… but that includes a visit to City Hall. Sofia is just a kid – will anyone take her seriously? Sofia sets out to show that even though she is just a young girl, she’s got the brain and the grit to turn her idea into reality. Fabulous illustrations and perfect rhyming couplets make this story a read aloud hit, every single time. Make sure to also check out the other books in this series which continue to stand the test of time: Iggy Peck, Architecht, Rosie Revere, Engineer, and Ada Twist, Scientist!

The Girl and the Bicycle, by Mark Pett: This is a beautiful, wordless picture book, another wonder that reads like a silent movie. In this story, a young girl sees a bicycle in a store window, and she knows she has to have it. So she works hard, picking up odd jobs around her neighborhood, all in the hopes of earning enough money to buy that special bike. But what happens when she finally has the money and the bike is gone? You have to read it to find out!

Bike on, Bear, by Cynthea Liu, illus. by Kristyna Litten: Bear can do many things well– except for the one thing he desires most of all: he cannot ride a bike. He stops at nothing to help him learn this skill and eventually finds a “how-to” book which he devours. Nothing seems to help though, and when a young goat is suddenly viewed getting carried away by the wind, Bear knows there is only one way he can save the baby animal – by riding a bike. Will he succeed? We love Liu’s take on perseverance, the Bear’s continuous courage and dedication to learning a new skill. And the beautiful color palette in which the illustrations are rendered makes the sweet children’s book about perseverance even more special.

Brave Irene, by William Steig: Steig’s sweet story from the 1980s is such a wonderful testament to the power of perseverance and the things we do for love. When Irene’s mother, a dressmaker, falls ill, she is unable to deliver a dress she made for the duchess before an important ball. So Irene takes it upon herself to deliver this dress, but she must battle the bitter cold, tons of snow and howling winds to get there. She almost gives up- almost. But Irene braves the elements and her perseverance is rewarded greatly. An oldie but goodie – this children’s book about perseverance has become a classic, without a doubt!

The Most Magnificent Thing, by Ashley Spires: This is a hugely popular children’s book about perseverance — and for good reason. In this story, a young girl and her pup try their hardest to make the most magnificent thing. But despite their best efforts, they can’t get it right, and their inventions simply don’t pass the child’s rigorous tests. Though the child gets mad and wants to give up after all of her hard work, she eventually steps away from her perceived failures, calms herself down after a walk, and then magic happens. I love the realistic manner in which anger is treated here and how we see the child working through her anger to get herself back on task and on point. Such a winner, and a powerful show of resilience!

Drum Dream Girl: How One Girl’s Courage Changed Music, by Margarita Engle, illus. by Rafael Lopez: This is a beautiful story of a young girl living in Cuba, a cherished children’s book about resilience in our school library.  It is the epitome of turning a “can’t” into a “you better believe I can”! Who says girls can’t play drums? We love the protagonist’s no holds barred attitude, and her determination to turn her dream into a reality. And aside from the fabulous narrative, the illustrations are simply breathtaking.

The Carrot Seed, by Ruth Krauss, illus. by Crockett Johnson: A young boy plants a carrot seed and, despite warnings that the seed will not grow, he tends to it carefully, believing in his heart that it will flourish. I love this story of a child’s steadfast conviction, his dedication, and the manner in which he stands his ground, despite the naysayers and opponents whispering in his ear. This book was first published in 1943 and has allegedly never been out of print since. That’s the best testament to this quiet and tender story. Such a gem!

Max and Marla, by Alexandra Boiger: A boy and his owl are on a mission to become the next winter Olympic sledding champions! They understand the rules of the game and have taken all the preparations they need to succeed. But when things don’t go their way- when they take some unexpected stumbles- they learn that true success might not always be measured by a medal at the end of the contest. We love this sweet and engaging story of practice, perseverance, and, above all, friendship. For our full review of Max and Marla, click here!

Ursa’s Light, by Deborah Marcero: How we love the story of Ursa, a bear who dreams big– and then even bigger! Ursa wants to fly, but her initial attempts at soaring all fail. Bears, after all, don’t fly! But when Ursa auditions for a role in a show as a shooting star, her performance might just allow her dreams to take flight. We love Ursa’s message of always believing in your self, even when others might try to steer you in a different direction.

The Curious Garden, by Peter Brown: What a quietly beautiful story about a boy in a dreary town who discovers a straggling garden while out on a walk one day. He decides to care for it, nurturing it with love and patience and perseverance, even after it is harmed by the elements. This book is stunning both in story and illustration, with themes that transcend perseverance alone and also include creativity, environmental activism, and community improvement. Just gorgeous, and one of our most cherished books about perseverance. 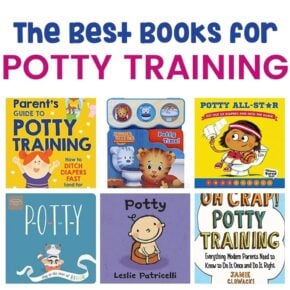 These Potty Training Books Put a Fun Spin on Learning to Use the Toilet! 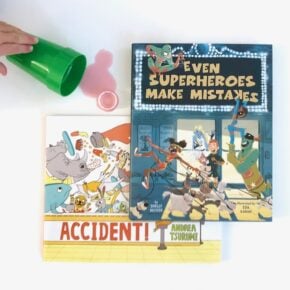 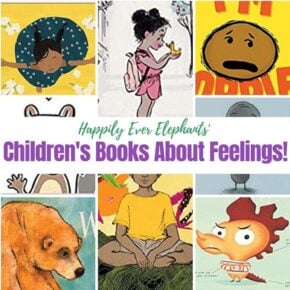