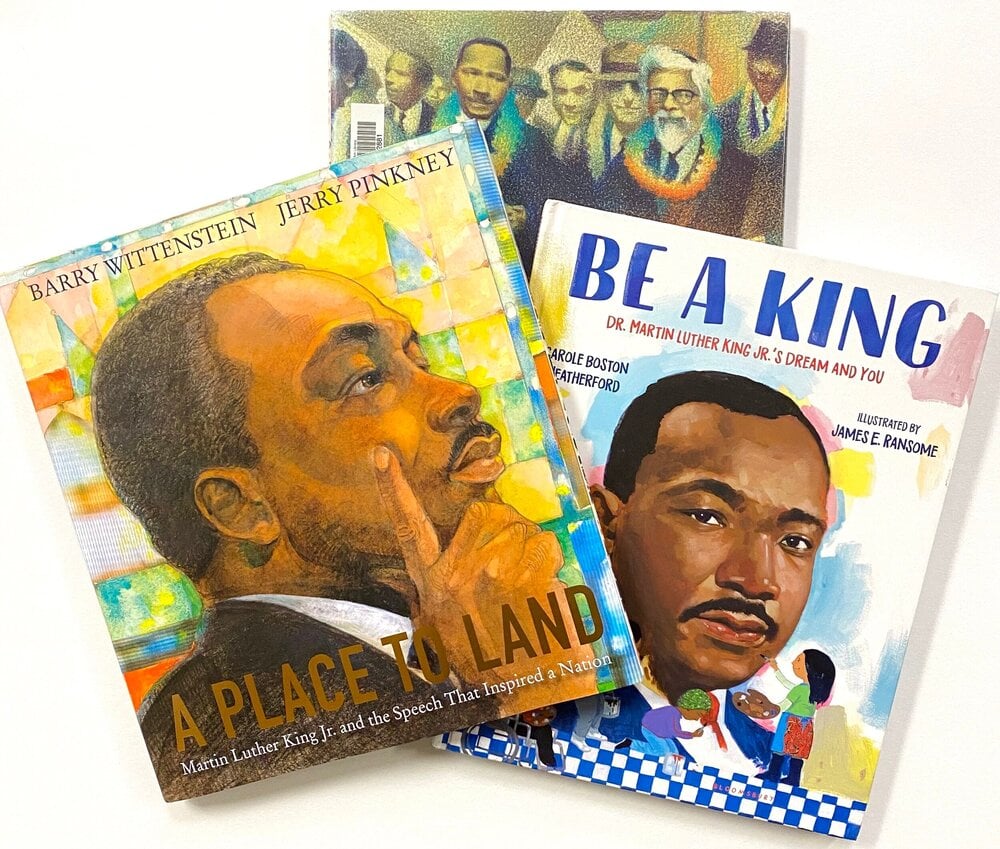 Inside: Looking for great picture books about Dr. Martin Luther King, Jr. to read with children of all ages? Look no further. Here are some of the best books about MLK for kids of various ages.

I was in Mr. Terry’s seventh grade civics class when I found it. Just weeks away from my Bat Mitzvah, I walked into the crowded classroom, headed to my desk, and sat down to find a note waiting for me. It was a folded up piece of paper, and it had my name, Lauren, scribbled on the front. I remember smiling as I opened it up, because what kid doesn’t love getting notes, waiting with anticipation to discover the sender? But when the paper was spread out in front of me, I inhaled sharply. I vividly remember trying to fight back the tears that flooded my eyes, the fear that paralyzed my body. I recall my hands shaking as I tried desperately to catch my best friend’s attention, all while wondering which of my other classmates were laughing at me as I suffered.

What was inside this awful note?

As a Jewish child, I grew up learning about the evils of religious persecution and racial discrimination, but this was the first time it hunted me down and stared me in the face, the first time I was personally affected by such despicable hatred. This experience left an indelible scar on my heart, right before the momentous day I was meant to rejoice at becoming a Jewish young woman. It was on this day I truly understood that people would engage in abhorrent behavior simply because they don’t like how you look or agree with what you believe.

As you know, sharing #booksforbetter has become a true passion of mine. I love sharing books that help us bridge divides and teach kids that we are all one and the same — all of us human beings with beating hearts and big dreams and a thirst to learn and grow. It has also become important to me to share books showcasing the dangers of hatred — and how love, communication and understanding can help assuage this dark stain on our world.

And so it is that I have always had a deep appreciation for stories about Martin Luther King, Jr. Every time I read about or watched his powerful “I have a dream” speech following that hateful act in civics class, I believed he was also speaking to me, a young Jewish girl seeking to understand why someone would want to hurt me because of my religion, just as people wanted to hurt him because of his skin color. I hoped his vision included a world where black and white children played together alongside children of all other races and religions, too. After all, one of the core tenets of Judaism is to “love thy neighbor as thyself,” a commandment which comes with no qualifications or asterisks. MLK’s words and brave actions in the face of extreme danger gave me hope at a time when I was terrified, hope that we would all — White, Black, Jewish, Catholic, Muslim, Gay, Straight, you name it — find a way to love one another wholly and unconditionally. His words continue to bring me hope today, especially in light of recent events in our country like the white supremacist rally in Charlottesville, the horrific murder of eleven Jews worshiping at Shabbat services in a Pittsburgh synagogue, and the shocking rise of anti-semitism in New York.

While many believe we have made significant progress both as a society and as a country, racial and religious discrimination still lurk behind dark corners. It is sickening — and thus vitally important that Dr. Martin Luther King, Jr.’s legacy is taught to and celebrated by children around the globe. Why? Because MLK is a hero to us all, and his legacy will continue to motivate future generations to carry out his great vision. His mighty words can find a home within every person’s heart and soul. They have the ability to inspire each and every one of us to reject prejudice and strive for a society where equality, compassion and respect reign supreme.

I sincerely hope that if you do one thing on Dr. Martin Luther King, Jr.’s birthday or during Black History Month this February, you read a story about MLK with your children and students. There are phenomenal picture books about MLK’s life that can be discussed with kids of all ages, and I cannot stress how important it is to share this one lesson with the next generation: Hate is a learned behavior. Only when we listen to one another and embrace our glorious differences can we eradicate hate and replace it with love.

We hope you enjoy these remarkable books as much as we do.

Be a King: Dr. Martin Luther King Jr.’s Dream and You, by Carole Boston Weatherford and illustrated by James E. Ransome: I love reading this beautiful book with my youngest students, for it imparts all of the values MLK stood for, without going into the more painful details of his journey. This book encourages a new generation of young people to be kings by emulating MLK’s remarkable character traits and actions. The lovely illustrations show kids how they can reenact his teachings in their own lives by always standing up for peace, breaking the chains of ignorance, and stamping out hatred by putting a foot down and standing tall.

Martin’s Big Words: The Life of Dr. Martin Luther King, Jr., by Doreen Rappaport and illustrated by Bryan Collier: Through his own famous quotes, this beautiful picture book brings MLK to life. Beginning with his life as a young boy and his vow to one day get “big words” like his father, to his death at a garbage worker’s strike, this biography is a fabulous introduction to one of the most prominent voices of the Civil Rights Movement. This is one of my favorite books to read with early elementary students, for its simple narrative that doesn’t stray from the gritty facts but hits all the right notes for younger readers. Age appropriate, powerful, and elegant.

I Have a Dream, by Dr. Martin Luther King, Jr. and illustrated by Kadir Nelson: On August 28, 1963, MLK stood on the steps of the Lincoln Memorial in Washington D.C. during the March on Washington. It was there he delivered one of the most powerful speeches our nation has ever witnessed. His words from this monumental speech are paired with Nelson’s exquisite paintings, making this a magnificent book to be treasured, memorized and honored for generations to come.

I am Martin Luther King, Jr., by Brad Meltzer and illustrated by Christopher Eliopoulous: We absolutely love the Ordinary People Change the World series for the way it tackles big stories and remarkable heroes in a kid-friendly, accessible manner. Through comic illustrations and word bubbles, this story gives voice to MLK as a child, then subsequently showcases his journey to changing the American landscape through peaceful protests and powerful words. This series is a favorite of my students.

A Place to Land: Martin Luther King Jr. and the Speech that Inspired a Nation, by Barry Wittenstein and illustrated by Jerry Pinkney: In this powerful book, readers are given an inside glimpse into the makings of MLK’s famous “I Have a Dream” speech. MLK believed that harder than beginning of a sermon was knowing where to end it: “It’s terrible to be circling up there without a place to land,” he once said. Finding a place to land proved challenging for for MLK on the night before his iconic speech, and the famous phrase, “I have a dream,” wasn’t even written down for inclusion in his words. Join MLK and his team of advisors and fellow speech writers as they prepared for this momentous day in American History. This one is an absolute beauty.

As Good As Anybody: Martin Luther King and Abraham Joshua Herschel’s Amazing March Toward Freedom, by Richard Michelson and illustrated by Raul Colon: We all know the story of Martin Luther King, Jr., a black boy who grew up to witness horrifying racial discrimination in America. He became a minister like his father before him, and subsequently rose to become one of the most visible and vital voices of the Civil Rights Movement. Abraham grew up years earlier in Europe, and as a Jewish man, he too, faced atrocious persecution. Abraham fled to America where he became a rabbi, and like MLK, he became a voice for equality. This is the story of how these two remarkable men came together as victims of discrimination, formed an unbreakable friendship, and used their voices to fight for peace and social justice. An extraordinary story, and a favorite to read to tweens.

« Previous PostIvy Aberdeen's Letter to the World is Pitch-Perfect Middle Grade!
Next Post »Ten Rules of the Birthday Wish, by Beth Ferry 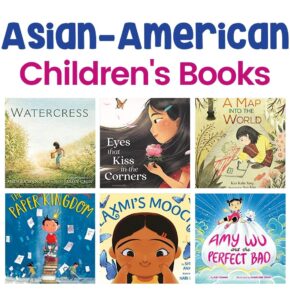 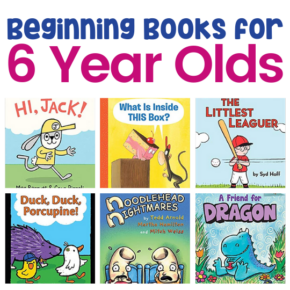 34 Books for 6 Year Old Readers That Your Child Will Adore!

These Children’s Books About Dogs Are Simply Pawesome!