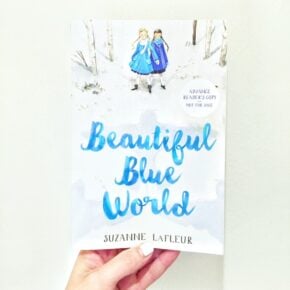 Every so often you read a book with such a fascinating and unique premise that it sticks with you long after the final chapter. You toss its themes around, wonder how the author came up with the imaginative plot, and marvel at the intriguing characterization and story. Beautiful Blue World by Suzanne LaFleur was one such novel. I was fortunate to receive an advanced review copy a couple of months ago, and I devoured the story in only two sittings (which says A LOT considering I have two small boys). I haven’t stopped thinking about it since.

Twelve year old Mathilde lives in Sofrande, a fictional town, with her parents and two younger sisters. Times are troubling – Sofrande is at war, meaning food is scarce and residents are in constant fear of bombings. As long as Mathilde is with her best friend Megs, Mathilde believes all will be fine. But when the army begins recruiting children to help with the war effort in exchange for money for their families, Mathilde knows that Megs will not only take the test, but pass it. Matilde can’t imagine life without her best friend — but she can’t imagine her days without her family, either.  So should she take the exam too? And if she does take it, what will actually become of her if she passes?

Beautiful Blue World is an intriguing exploration of war and a fascinating portrait of what it may look like if children were involved in the war effort.  How would their skills be utilized and harnessed? What do they possess in terms of vision and ability that adults may not? Would children be exploited or empowered? In Mathilde, LaFleur has created a compassionate and nuanced protagonist whose voice, tinged with both timidity and bravery, is written to perfection. Mathilde is one of those characters whose resourcefulness you want to teach your children, whose loyalty is unsurpassed, and whose penchant for kindness is one we all should model.  This, of course, begs the question — what happens when her loyalties are questioned?  You’ll have to read it to find out.  A beautiful, moving story, and one that I can’t wait to pick up a second time. I’m already eagerly anticipating the sequel.  Bravo to LaFleur – two enthusiastic trunks up!

Want the book? Get it here! Beautiful Blue World, Suzanne LaFleur.  *This is an affiliate link.

« Previous PostIt is Not Time for Sleeping, by Lisa Graff
Next Post »Ooko, by Esme Shapiro

The Secret of Nightingale Wood, by Lucy Strange 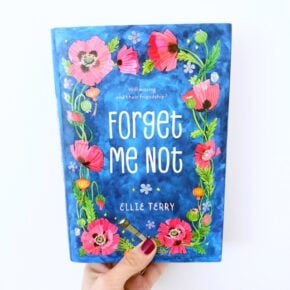 Forget Me Not, by Ellie Terry 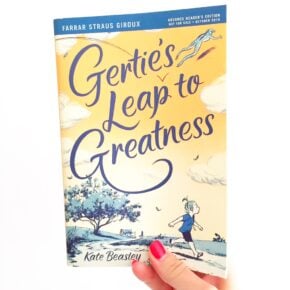